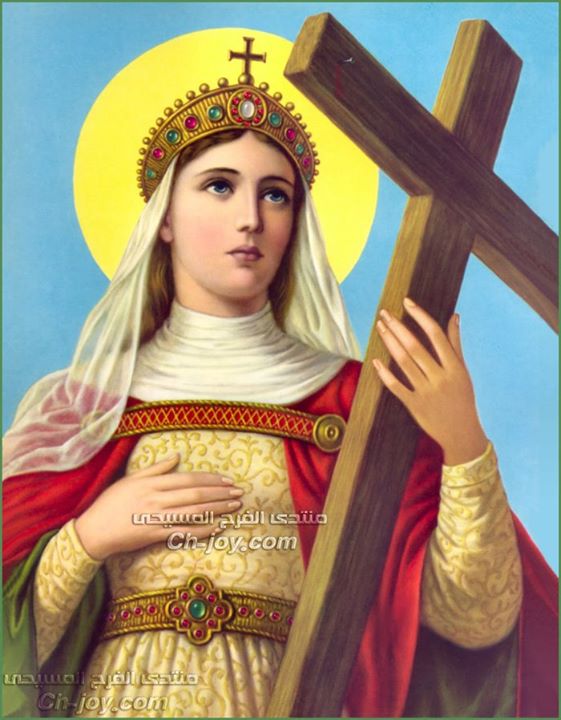 On this day the church celebrates the consecration of the church of the Honorable Cross of our Lord Jesus Christ. The Cross was uncovered by the lover of God, Queen Helena, mother of Emperor Constantine, from under the pile of Golgotha, after she ordered its removal.

As for the reason of how this great pile of dirt came into being: the Jewish leaders, when they saw all the signs and wonders which were manifested from the sepulchreof the Savior, such as raising the dead and healing the sick, became angry, and they sent forth throughout Judea and Jerusalem ordering all the people to cast the sweepings of their houses and the dirts over the sepulchre of Jesus of Nazareth. They continued to do so for more than 200 years, until it became a very great heap.

When St. Helena came to Jerusalem, and asked the Jews about the whereabouts of the Cross, they did not inform her. Finally, some of them told her about an old Jew called Judas who knew the place. She called him, and he denied it at first, but when she urged him, he told her about that pile. She ordered its removal and the Holy Cross was found. She built a church for it, consecrated it and celebrated for the Honorable Cross on the seventeenth day of the month of Tute. Christians make pilgrimages to that place every year as they do on the feast of the Resurrection.

A certain Samaritan called Isaac, as he was travelling with his family among the people going to Jerusalem, reproved the people for taking such trouble in going to Jerusalem to worship a piece of wood. Among the people was a priest whose name was Okhidus. While travelling along the road, they became thirsty. They found no water and they came to a well where the water was foul and bitter. The people became dismayed. Isaac the Samaritan started mocking them, saying, “If I witness a power by the name of the Cross, I will become a believer of Christ.” The priestOkhidus was moved with divine zeal and prayed over that foul water and made the sign of the Cross on it, and it became sweet. All the people and their animals drank, but when Isaac drank, the water was bitter and wormy. He regretted and cried and came to the saint, Father Okhidus, bowed down at his feet and believed in the Lord Christ. Then he drank from the water, and he found it sweet. The water of that well possessed the power of becoming sweet for the believers and bitter for the others. A cross of light appeared in the well and a church was built there.

When Isaac the Samaritan arrived in Jerusalem, he went to its bishop who baptized him and his family.

Because the feast of the appearance of the Honorable Cross, which is on the tenth ofBaramhat, always comes during fasting, it was substituted by the fathers for the Seventeenth of Tute which is the day of consecration of its church.

Glory and worship be to Jesus Christ our Lord forever and ever. Amen